I'm back from the field for just a week, and all of that fieldwork has put me in the mood for. . .a post about fieldwork!

For those of you field paleontologists, you know what I'm talking about. Someone out hiking or prospecting saw some really cool bones sticking out of the rock. They didn't have a GPS. . .but they did have a digital camera. So, they shoot a photo of their groundbreaking discovery and proudly email it to you with a scan of a marked-up topo map. You open the email with trembling fingers, and this is what you see: 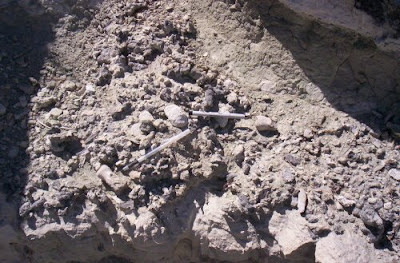 It's a pretty good photograph. . .there are pens for scale, clearly indicating the fossils that were found. Lighting is good, and resolution is excellent. But for purposes of relocating the site? Useless!

What's missing? Context, context, context! A closeup of the rock or the eroding bones is interesting, but it doesn't tell you a thing about what side of the ravine the bones were found on, how high up, or anything else. A friend and I once were sent out to relocate some dinosaur bones found by an amateur paleontologist. He had emailed a GPS point and a close-up photo of the bones similar to what I've pictured above (all good things to do!). But. . .we spent a good solid two hours trying to relocate the fossils - and never succeeded. The GPS point (assuming we were even given the right datum, or hadn't miscopied the coordinates - that's a topic for another post!) was in the base of a wash, and the photo (even though uselessly close-up) indicated the specimen was on one side or the other of the wash. The photo showed a nice hadrosaur rib, but no larger context. 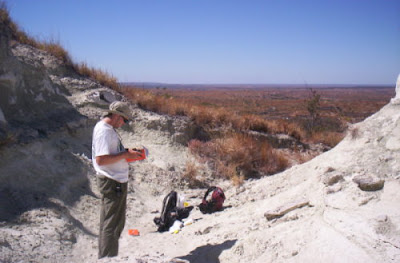 Here's an example of a better field photograph. Note the fact that the photo shows the overall context of the site - crucial for relocating the correct horizon later, or when compensating for a bad GPS coordinate. If you could read the field notebook of the character who is providing the scale in this picture, you'd see that he is writing down: 1) date and time of the photograph; 2) general direction that the camera is pointing; 3) location of the fossils relative to a landmark in the photo such as a backpack or mound of rock; 4) file number of the digital photo on the camera; and all sorts of other useful informational bits. I've learned from bitter experience that these data (and then some) are what makes the difference between a useful piece of the scientific record and a pretty snapshot. The close-ups are still necessary as field documentation, but they're often secondary in importance to the broader pictures.

So the lesson here? Take good field photographs with lots of visual context - and record the important data that will be necessary for complete recall later (never trust your memory).
Posted by Andy at 6:51 PM