I am pleased to note that my colleague, friend, and fellow ceratopsian fan Scott Sampson has just started up his own blog, "The Whirlpool of Life."

For those of you who only know him as a paleontological researcher, Scott is also a very skilled communicator and educator. The past few months have seen some tremendous successes in that regard - first, his on-screen and behind-the-scenes role with the new PBS kids' show Dinosaur Train, and second, his just-published book Dinosaur Odyssey.

Scott has a special interest in popularizing issues of science education, evolution, sustainability, and paleontology, all of which promise to be themes on the new blog. This will be a good one to add to your regular reading list! 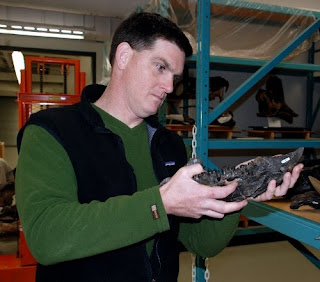 Scott Sampson with an extinct friend.
Posted by Andy at 8:55 AM 4 comments:

How Meaningful Are User Ratings?

In the spirit of some earlier posts on this blog, The Scholarly Kitchen (an excellent blog for those interested in following issues of open access publishing) has this post about the utility of ratings systems at journals such as PLoS ONE. Interesting food for thought.
Posted by Andy at 6:33 AM 2 comments:

I wanted to take a brief moment to call your attention to a situation brewing at Michigan State University - the powers-that-be are on the verge of closing down their Geological Sciences program.

Geoscientists impact our lives in more ways than most of us realize. Did you drink a glass of clean water this morning? Geologists and hydrologists help to keep our water supply clean and safe. Did you fill your car with gas this week? A petroleum geologist helped locate the oil deposits and coordinate their extraction. Do you use a cell phone or laptop? The cobalt in the batteries (and nearly all of the other raw materials) was mined from deposits located by geologists. Did your local roads not wash away during the last major rainstorm? A geologist likely had a role in that too. Not to mention all of the paleontologists, planetary geologists, sedimentologists, mining engineers, and the like who have significant training in geology departments around the world.

Surveys find that we are facing a severe shortage of trained geoscientists in the coming decades, as the older generations retire. Our need for geoscientists is not going away, and closing geology departments is not a way to rectify this.

What can you do? Check out these two posts by Chris Noto (guesting at ReBecca's Hunt's Dinochick Blogs) for more information. Don't let the MSU geology department go extinct!
Posted by Andy at 7:29 PM 5 comments:

Many of the recent posts on this blog have dealt with issues of access to the scholarly literature for those outside the library systems of large research institutions. A digital divide is developing in academia, largely due to the expensive costs of institutional subscriptions and pay-per-download distribution schemes of commercial and non-profit publishers alike.

Thus, I was ver

y excited to hear about the launch of DeepDyve. This website essentially offers a rental service for scholarly publications. Search a database, find an article, and view it on the website's Flash viewer. The prices are quite reasonable - 99 cents per article for the Basic Plan, $9.99/month to get 20 rentals a month on the Silver Plan, and $19.99/month to get unlimited rentals on the Gold Plan. I decided to test out a free trial of the Gold Plan and see if DeepDyve was right for me.

Promotional literature promised "30 million articles from thousands of authoritative journals," so I was expecting good things. Landing on DeepDyve's simple, attractive home page, I sat down to run my first queries.

Unfortunately, the hype hasn't yet caught up with the reality of scholarly publishing. A search for "Triceratops" launched from the web site's home page generated over 84,000 hits. . .most of which were completely irrelevant medical literature ("Median and Radial Nerve Compression About the Elbow" popped up on the first page, for instance). Using the site's advanced search filters, I was able to trim the results down to 71 articles. Of these articles, 8 were listed as "free" (they were already available through open access journals) and 61 only offered a preview of the abstract. A scant 2 articles were available for rental (from the journals Annual Review of Earth and Planetary Sciences and Annual Review of Ecology and Systematics).

Why such a poor showing? It comes down to the fact that many of the societies and publishers that own or license our publications haven't yet reached an agreement with DeepDyve to allow rental of relevant articles. Thus, papers from heavy hitters like Journal of Vertebrate Paleontology and Paleobiology simply aren't available.

The rental plan also may turn some people off (although I don't think it is a complete deal breaker). In short, you can't download a PDF - all you can do is look at the file within the provided viewer. This is useful for those times when the article turns out to be irrelevant. But, it may ultimately prove unsatisfactory for those inevitable moments when you want to be able to access literature away from an internet connection (and we all have those times!). And, it seems somewhat unsettling to pay for content that you don't actually get to keep (unlike services such as iTunes).

I want to like DeepDyve. . .I really do! It promises to open up swaths of the scholarly literature that were previously unavailable. But, right now DeepDyve is shackled by the limited availability of publications (at least for us paleontologists). There is very little value-added over a standard Google search. Perhaps the future has big things in store. . .I'll be keeping an eye on the situation!

For additional commentary on DeepDyve, and some responses from the company, check out this post at the Scholarly Kitchen.
Posted by Andy at 8:58 PM 9 comments:

Dinosaur Running and Endothermy in PLoS ONE

On a personal note, I have recently stepped up as "Section Editor" for paleontology at PLoS ONE. This means that I'll be coordinating the editorial flow for most paleo-themed papers that come the journal's way.

One of the real joys of editing for a major journal like PLoS ONE is getting a "sneak peak" at some pretty nifty research. Today, Herman Pontzer, Vivian Allen, and John Hutchinson have a new paper that should be of interest to this blog's general audience [full disclosure: I was the academic editor for this contribution]. As always, papers at PLoS ONE are free to download, comment upon, and rate.

The abstract and citation are copied below; for more info, check out the press release or Ed Yong's excellent blog post on the topic. 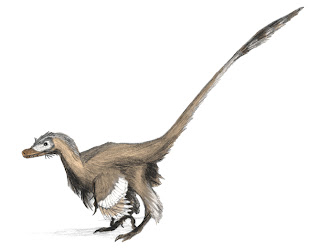 Abstract
Background
One of the great unresolved controversies in paleobiology is whether extinct dinosaurs were endothermic, ectothermic, or some combination thereof, and when endothermy first evolved in the lineage leading to birds. Although it is well established that high, sustained growth rates and, presumably, high activity levels are ancestral for dinosaurs and pterosaurs (clade Ornithodira), other independent lines of evidence for high metabolic rates, locomotor costs, or endothermy are needed. For example, some studies have suggested that, because large dinosaurs may have been homeothermic due to their size alone and could have had heat loss problems, ectothermy would be a more plausible metabolic strategy for such animals.

Methodology/Principal Findings
Here we describe two new biomechanical approaches for reconstructing the metabolic rate of 14 extinct bipedal dinosauriforms during walking and running. These methods, well validated for extant animals, indicate that during walking and slow running the metabolic rate of at least the larger extinct dinosaurs exceeded the maximum aerobic capabilities of modern ectotherms, falling instead within the range of modern birds and mammals. Estimated metabolic rates for smaller dinosaurs are more ambiguous, but generally approach or exceed the ectotherm boundary.

Conclusions/Significance
Our results support the hypothesis that endothermy was widespread in at least larger non-avian dinosaurs. It was plausibly ancestral for all dinosauriforms (perhaps Ornithodira), but this is perhaps more strongly indicated by high growth rates than by locomotor costs. The polarity of the evolution of endothermy indicates that rapid growth, insulation, erect postures, and perhaps aerobic power predated advanced “avian” lung structure and high locomotor costs.
Posted by Andy at 10:15 PM No comments:

Paleo Paper Challenge: Are You Challenged Yet?

Last night, Dave reminded me that it's been nearly a month since we've had an update or progress report for all of you participating in the Paleo Paper Challenge. Remember, your homework is due January 1!

In my last post, I required you readers to publicly shame me if I didn't get right to work on my contributions. Well, I deserve to be shamed. I will confess to doing virtually nothing over the last few weeks (aside from a few very, very minor edits). . .thus, setting a very, very bad example. (although I did help get another manuscript that's not part of the challenge into review!)

I was pleasantly surprised to learn earlier today that last week's post about pachycephalosaur ontogeny was awarded "Blog Pick of the Month" for October by everyONE, the PLoS ONE community blog. Thanks!

On a related note, check out the following video from UC Berkeley, with a great summary of the research published last week in PLoS ONE: