New Fossil Species of 2011 - A PLoS ONE Retrospective


What do sauropods, primates, crabs, cats, and crocodiles have in common? They're all animals in the fossil record that had new species named in PLoS ONE this year!


As 2011 winds down, I'm going to devote two posts to some navel-gazing at paleontology in the online, open access journal PLoS ONE. PLoS ONE really has been a ground-breaking publication, partly responsible for spawning the term "megajournal" as well as inspiring clones from the very publishers who invested some effort over the past few years in downplaying the worth of the PLoS ONE publishing model.

[Note before we continue: Although I do have an "official" volunteer role as one of the academic and section editors for the journal, any opinions in this post are entirely my own.]


In any case, let's start our 2011 retrospective with a look at some of the new taxonomy that appeared this year. 17 new species of extinct organism were named on the "pages" of PLoS ONE this year, but these were not by any means distributed evenly across the tree of life.

Five out of 17 were mammals, only one was a non-vertebrate (a lonely, recently extinct land crab from Hawaii), and three - THREE!!! - were sauropodomorph dinosaurs. What kind of crazy world is this where sauropodomorph taxa outnumber crocodylimorphs, and arthropods? Dinosaurs as a whole did quite well, with seven new non-avian dinosaurs gracing the HTML code of PLoS ONE.

In 2012, I would love to see the following trends:

In the next post: PLoS ONE is now a major force in paleontological publishing. What were the overall trends in 2011? What might the future bring?
Posted by Andy at 11:29 AM 17 comments:

I've been woefully behind in promoting this (and Dave Hone has taken the lead in hosting it this year - thank you, Dave!), but it is time to get on with the 2011 Paleo Project Challenge. Got a nagging little project that just requires a few days of concentrated effort to finish? Quit the excuses, and just get it done! That's the whole point of this. Whether it's research, artwork, a curation project, or whatever, anything is fair game.

Dave Hone has more over at Archosaur Musings. Mike Taylor and Matt Wedel have blogged about their own contribution. What will yours be?
Posted by Andy at 1:26 PM 1 comment: 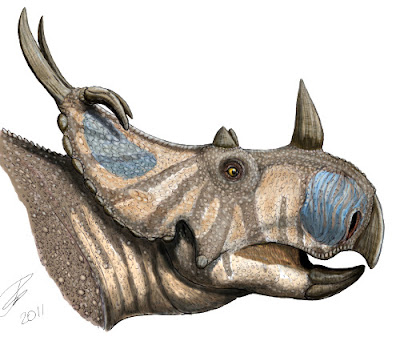