Got a Question? Ask a Biologist! 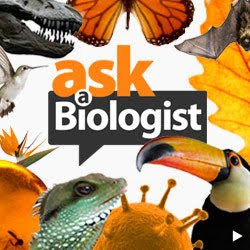 In case you haven't yet heard the news, the UK-based "Ask a Biologist" web site has just undergone a major redesign. A whole host of bio-type scientists from around the world, including many paleontologists, are available to field your every question (within reason, of course - they can't do your homework for you!). Congratulations to all of the folks behind AAB - great work! As for the rest of you - go ask a biologist!
Posted by Andy at 7:27 PM No comments:

I scarcely believed my eyes when I picked up the mail today. . .my first royalty check ever! It wasn't a lot - only $180.84 - but that's $180.84 that I didn't have yesterday. It's also making me reconsider some of my (previously uncharitable) thoughts about for-profit academic publishers.

One of the big criticisms of many commercial publishers is that they get the content written, typeset, and reviewed for free by the scientists, and then turn around and sell the content back to libraries (and individual consumers) at an exorbitant price. Furthermore, many of these publishers continue to show major growths in profits even in the face of an economic downturn. Well, it turns out that they're not as heartless as we thought. In response to pressure from open access publishers (some of whom make their authors pay ridiculous rates), libraries (who are having to cut back on all journal subscriptions), and researchers, the commercial publishers have had a change of heart. They've banded together into a consortium (with the rather euphonious name of BENT, combining portions of the major publishers' names) with the stated purpose of giving back to the academic community.

So how does it work? Well, let's say that an academic journal from a for-profit publisher costs libraries $1,200 per year. By comparison with non-profit journals of equivalent number of pages (and assuming that these non-profits are only breaking even), this means that each subscription nets around $850 profit per year. Assuming a 20 percent profit margin for the company (the investors deserve to be compensated, after all), this leaves around $610 of "spare" cash from each subscribing institution. Of course, we also have to remember that many libraries are only getting the journals as part of a bundle. Assuming that these bundles cut journal subscription costs in third, this still leaves around $200 from each subscribing library per year. If 500 libraries worldwide subscribe to a given paleontology journal in some form, this means a minimum of $100,000 left over!

Here's where the publishers have done something really, really smart. Recognizing that academics put a lot of time and effort into writing and reviewing articles, all of these after-profit proceeds are going back to the researchers. The amount designated per article is based on the length of the article within the years volume. The authors of an article get 75 percent, and the editors and reviewers get 25 percent.

What's that boil down to in real terms? Well, a co-author and I published a 6 page article in a journal that had a total of 1,400 pages last year. Proportionate to the $100,000 left-over money, this means our article gets a $428 cut of the proceeds. $107 goes to the reviewers and editor (split three ways), and the remainder ($321) goes to us authors. I was the junior author, so I got only 1/3 of that amount - $107. But, I also reviewed a 12 page article for the journal ($71 for that!). And better yet, the publishers now compensate us authors for profits from sales of PDFs! Frustratingly, I don't know how many copies of the article were sold, but I do know that I earned $2.84 as a result. Not too shabby - I'll quit complaining about having to pay $35 for a single article, knowing that the authors now reap the benefits.

This move by the publishers is a huge blow against the open access movement, and it means that I'm going to think twice about just giving my hard-earned research away for free (or worse yet, paying a publication fee). Regardless of what happens, I can't wait for another royalty check to arrive this time next year!
Posted by Andy at 12:00 AM 3 comments: