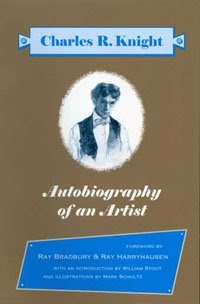 Charles R. Knight was one of the most influential paleontological artists of the 20th (and latest 19th) century. His iconic paintings of Tyrannosaurus, Brontosaurus, woolly rhinos, and other prehistoric animals have influenced the direction of scientific thought, inspired movies and toys, and motivated paleontologists for decades. Every paleontologist, whether consciously or not, owes a debt of gratitude to Knight and his work.

I was particularly thrilled to receive a copy of Knight's autobiography for my birthday recently. This slim paperback, largely written by the author himself, is a fascinating glimpse into one of paleontology's vivid imaginations.

The story opens in Knight's childhood, with his earliest recollections of visits to the newly-founded American Museum of Natural History, among other memories. He details his early loss of vision in one eye, a sometimes strained relationship with his stepmother, and an early trip across the Atlantic to visit his father's family. The prose offers a window into a lost (but not necessarily simpler) time, as we see the stirrings of an interest in natural history.

The next phase of the book covers Knight's initial training in art, from sketches to stained glass. A parade of characters passes by at this and other points in the book, from the obscure, to the eccentric, to the famous. We learn about Knight's first wildlife art, and then his near-chance meeting with paleontologist Jacob Wortman. So began a paleo-art career that was to span decades.

The rest of the book largely functions as a travelogue, with occasional vignettes of paleontological characters. Most fascinating for me, as a dinosaur paleontologist, were the pages devoted to Knight's collaboration with Edward Drinker Cope. Knight describes in detail the faded glory of Cope's home at 2102 Pine Street, packed to the brim with papers and bones. Curiously, despite the tremendous influence that Cope had upon Knight's early art, the men only knew each other for a few months before Cope's death.

Perhaps because Knight wrote the book as an autobiography rather than a paleontological treatise, the reader gets only the briefest glimpse into Knight's imagination and thoughts on prehistory. The book is focused on people and places, rather than on the fossils. Some readers may be disappointed by this, but I found the format quite engaging from start to finish. Judicious editing by Jim Ottaviani helps the book flow along quickly--the manuscript was left unfinished by Knight, so I am sure it took a little bit of work to whip the text into shape.

The book is greatly augmented by a few pages of text from some notables--forewords by Ray Bradbury and Ray Harryhausen, and afterwords by a number of paleontologists from the American Museum of Natural History. Illustrations by Mark Schultz bring to life many of the distinctive characters (including what is probably the earliest description of a "crazy snake guy"). Finally, memories from Charles Knight's granddaughter, Rhoda Knight Kalt, add a unique perspective and a fitting tribute. If you're looking for an enjoyable read in the field this summer, make sure to pack this book!

Charles R. Knight, Autobiography of an Artist, by Charles R. Knight (with forewords, introductions, and afterwords by a number of other folks), 112 pages, published by G. T. Labs, Ann Arbor, Michigan.
Posted by Andy at 7:34 AM

CF prevents me from enjoying fieldwork (way too many meds to worry about), but it sounds like a good book to read anyway! :-D