The Cretaceous of Gondwana - the formerly connected southern landmasses of Antarctica, Australia, South America, Africa, India, Madagascar, and Arabia - is a sticky problem. The terrestrial fossil record is spotty at best in most locations, and tremendous geographic and temporal gaps remain. As a consequence, there is considerable debate about the sequence of the tectonic breakup of Gondwana and even the very identity and relationships of some of its dinosaurs and other Mesozoic beasts. Once in a great while, some intrepid field paleontologists take a chance and make discoveries that move our knowledge ahead by leaps and bounds. Areas of Gondwana such as Madagascar and Argentina have had fossils rolling out of the Cretaceous hills, doing wonders for paleontological knowledge. Today, a new paper in PLoS ONE has done such a thing for Australia.

Historically, paleontologists working in the Cretaceous of Oz have had to make do with pretty fragmentary material. With the exception of Muttaburrasaurus (a plant eating ornithopod known from reasonably complete skulls and skeletal material) and Minmi (an armored ankylosaur known from a relatively complete skeleton), most of the other named taxa from this time are known only from scrappy elements (e.g., Kakura, a theropod known from an isolated, opalized tibia). This poor fossil record has resulted in some odd, and highly unlikely, claims. For instance, it has been suggested that ceratopsians (otherwise known only from the northern hemisphere) lived in Australia (based on isolated ulnae that admittedly do look rather ceratopsian - although other assignments haven't necessarily been ruled out effectively), and that Allosaurus (a late Jurassic theropod from North America) survived into the early Cretaceous here. When it comes to the meat-eating theropods and the long-necked sauropods, the material is pretty frustrating. Without better specimens, it's virtually impossible to know how Australia's animals compared to those elsewhere!

For this reason, the new paper is so very important. A team of paleontologists from the Queensland Museum and the Australian Age of Dinosaurs Museum of Natural History here describe three completely new dinosaur species. Two are sauropods, the third is a theropod, and all come from the Winton Formation of Queensland. The portion of the Winton Formation hosting the dinosaurs is estimated as late Albian in age (based on fossil pollen, an important criterion in the absence of radiometric dates), or roughly 100 million years old. 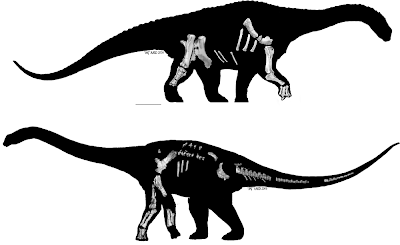 The two sauropods belong to a group called titanosaurs. Titanosaurs were the dominant sauropods of the Cretaceous, with a virtually global distribution. Diamantinasaurus matildae (the sauropod at the top in the illustration, charmingly named after "Waltzing Matilda") and Wintonotitan wattsi (bottom) are both known from partial skeletons, whose owners might have measured 50 feet in total length (~14.8 m) when alive. Unfortunately, the phylogenetic position of the two animals is somewhat uncertain. The authors chose to put the animals into two very different datasets for their cladistic analysis (in terms of characters and taxon selection), so it's tough to know where the things actually fall out. It would be informative to merge the two datasets as much as possible and see how that affects tree topology. The incongruent trees also complicate any biogeographic conclusions that might be drawn. Regardless, it looks like Wintonotitan is a relatively basal titanosauriform (what some folks might call "primitive"), and Diamantinasaurus falls out within a group called Lithostratia, close to or within the saltasaurids (many of these animals are well-known for the armor studding their backs).

There is a slim possibility that one or both new species of sauropod are synonymous with Austrosaurus mckillopi, a taxon based on poorly preserved, incomplete vertebrae from a roughly contemporaneous formation. There is some overlap with Wintonotitan, but the vertebrae from the two animals are apparently pretty different. Diamantinasaurus doesn't preserve any vertebrae, so we can't directly compare it with Austrosaurus. But because the type of Austrosaurus is so incomplete, it might be safely ignored as a nomen dubium. I'll leave it to the sauropod experts to decide that!

Our third beast is a theropod (meat-eating dinosaur) named Australovenator wintonensis. It was perhaps a third of the body length of the two sauropods and is represented by a partial skeleton including a complete hindlimb, partial forelimbs, and a portion of the lower jaw. For Australian theropods, this is simply dumbfounding material (remember Kakura, only known from a fragmentary leg bone?). Heck, for theropods anywhere this is pretty darned good. Australovenator falls out as an allosauroid (a pretty common group of predators from the Jurassic and Cretaceous) just outside of carcharodontosaurids. With Australovenator thrown into the mix, allosauroids had a nearly global distribution.

Open Access Nerdiness
This paper is a fantastic example of the real benefits of an on-line, open access journal like PLoS ONE. Without page limitations, the authors were allowed to truly monograph the heck out of the bones. Virtually every element is illustrated from multiple angles (with high resolution photos downloadable from the website!) and accompanied by thorough text descriptions and measurements. The editors of most journals would freak out over such a "waste" of precious space - but I have a feeling that future researchers are going to thank the authors for their thoroughness. As a PDF, the paper weighs in at 51 pages - and this doesn't include the supplementary information!

The authors (perhaps at the editors' behest) also make very explicit statements about the nomenclatural availability of the names, a direct result of the Darwinius fallout. Hopefully this will satisfy the requirements ICZN.

On the rather nitpicky side, I would note that the minimal post-processing of the manuscripts employed by PLoS ONE shows up here and there. For instance, the term "phalange" is used as the singular instead of the correct "phalanx" (one of my few pet peeves), among a few other oddities. These are rather minor bones to pick in an otherwise weighty manuscript.

As always, if you have something to say, post a comment here and then go provide your comments, notes, and ratings of the article at the PLoS ONE website.

The Bottom Line
So what's so important about this paper? Well, we finally have good sauropod material from the Cretaceous of Australia, and an excellent theropod specimen to go along with it. No doubt--these specimens are going to be critical for future studies on the evolution and biogeography of both groups, as well as greatly filling in our understanding of Australia's geological past. It is not an exaggeration to say that Australian dinosaur paleontology has taken a quantum leap forward!

Update: Read more about the discovery at the PLoS community blog, the museum website, and SV-POW!. Finally, a paleo discovery that's worth the hype!

Dinosaurs of the Winton Formation, including Wintonotitan (left), Diamantinasaurus (middle), and Australoraptor (right). This and the above images are modified from the originals by T. Tischler (citation below), under a Creative Commons Attribution license.

Cool post, and congrats to the authors on a spectacular paper. On 'phalange' vs 'phalanx', it's my impression that the former isn't wrong per se, as you can find it in older literature (and, indeed, it's still used by some). Nevertheless, I've only ever used 'phalanx' and I'd be interested to know if 'phalange' really is wrong.

I would be interested in get an opinion on the 'phalange' problem. . .if anyone knows something, please chime in!

Wonderful rundown, Andy. I just got finished reading the paper--I had early access to it, and intend to comment myself when I stop being so bloody busy.

Arrrgh! The family physicist has to object. Quantum leaps are small discrete steps, not huge advances!

But "quantum" sounds so scientific and physics-y! ;-)

I think the misuse of quantum leap derives from childhood overexposure to Scott Bakula, where "Quantum Leap" became associated with huge leaps through time and space.

"The authors chose to put the animals into two very different datasets for their cladistic analysis (in terms of characters and taxon selection), so it's tough to know where the things actually fall out. It would be informative to merge the two datasets as much as possible and see how that affects tree topology."

It's always frustrating when this happens. The bright side is this is a very useful descriptive paper with excellent and numerous figures. I am sure that the sauropod clado-jockeys will have no trouble plugging these new taxa into their matrices. :-)

I did originally try to squish the two new sauropods into a larger combined dataset, however, the massive number of missing data just resulted in a horrible mash of polytomies. So, instead I decided to run these taxa in the latest datasets for titanosaurs to see if they both revealed relatively similar positions...which they did. So, I was happy with that. As more material comes out they can be coded for more characters, however, this doesnt fill the gaps for the tens of other taxa that remain with massive data gaps.

Such is dinosaurian life.

I'll leave that for other cladophiles.

Nice Post! Speaking of which, I just did a post on the Cretaceous burrows mentioned in an article News Scientist. Check it out!!

Interesting blog as for me. It would be great to read more concerning that matter. Thanks for sharing that information.
Sexy Lady
Female escorts