The last two posts here have focused on my most recently published paper, fully describing the skull of the horned dinosaur known as Nedoceratops hatcheri and critiquing the hypothesis that it, along with Torosaurus latus, is simply an older individual of what we call Triceratops. Because I've already talked about the science of the paper, and some collegial interactions, I'm going to spend this final post in the series talking about a few odds-and-ends that just didn't fit anywhere else. Most of these are little windows into the process behind the paper - from writing to review to revision. And we'll start with. . .
Open Source Composition
I'm proud to say that every single step of the authoring process for my paper happened in open source software. I wrote the manuscript in OpenOffice.org Writer, formatted most of the references in Zotero, did initial image editing (contrast adjustment and background removal) in GIMP, assembled the figures in Inkscape, and submitted the manuscript through the journal website on the browser Firefox, all of which were running on various releases of Ubuntu. Score one for open source software (and open access publishing)!
On Organizing the Paper
I'm under no illusion that everyone (?anyone?) will agree with my conclusion that Nedoceratops is a valid taxon. In fact, I'm quite accepting of the possibility that I may be wrong. But even if this is the case, I still want my paper to be useful. So, I made my best effort to separate data from interpretation in the description section of the paper. Of course, I couldn't be completely successful on this point - after all, I had to compare Nedoceratops with Triceratops and Torosaurus (the most likely candidates for synonymy) - but I like to think that I mostly achieved my goal. If nothing else, I have pretty pictures. And. . .
Speaking of Pictures
My figures went through some pretty drastic changes during the evolution of this paper. In the first round of reviews, it was pointed out that in the text I kept referring to various structures illustrated in the figures, but only a ceratopsian geek could figure out what I was talking about.
For example, we have this lovely sentence:

The narial strut is inclined rostrally towards the dorsal end of the element, and enough original bone surface is preserved to indicate that a posterior internarial flange did not project from the caudal surface of this structure (Figure 4). 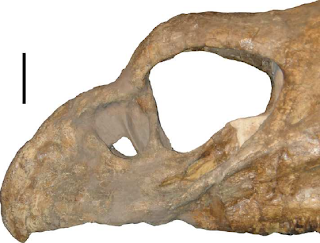 The photo is relatively pretty, but only a die-hard ceratopsian nerd could locate the narial strut or know where to look for a posterior internarial flange if such a thing even existed in this animal. So, for my next iteration I added some labeling: 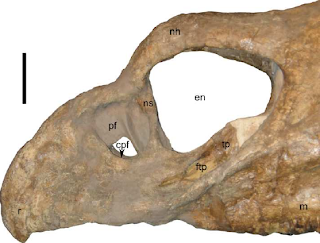 Of course, all of the abbreviations are explained in the caption (not shown here). "ns" refers to the narial strut I was talking about above. Finally, the editor mentioned that I should do a better job of indicating the "cpf" (canal at the edge of the premaxillary fossa). It wasn't just at the tip of the arrow, but over a somewhat broader area. Thus, that brings us to version 3: 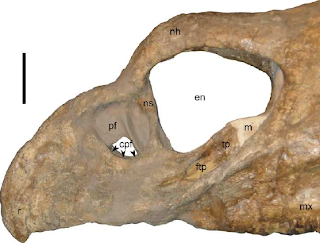 This, with the extra arrows showing the position of the canal, was the version that appeared in the paper.
If I learned anything from this experience, it was about the importance of good labeling and interpretive drawings for non-expert readers. Most of the labeled interpretive drawings alongside photographs (with the exception of parts B and D in Figure 1) were added at the direct request of the editor. Looking at the end product, this addition was a major improvement to the paper. Of course, I must also admit that having relatively unlimited space in an online journal allows this luxury!
Editorial Ethics
It's probably not a surprise to many of you that I am a volunteer academic editor at PLoS ONE. And those of you who have been paying attention probably noticed that the Nedoceratops paper was just published in that very same journal. This sounds pretty problematic on the face of it.
Thankfully, PLoS ONE has pretty strict editorial controls when one of their own editors submits a paper (in addition to a competing interests policy that covers this and similar situations). My experience as a submitting author was exactly the same as for any other author. Once the "submit" button was pressed, I had to wait just like everyone else. I couldn't control which editors handled it, who reviewed it, or even have a sneak peek at the reviews on-line. In other words, the system functioned exactly as it should.
My authorial feet were held to the fire by Leon Claessens, the handling editor for my submission. Leon, in my opinion, did a very professional job and didn't let me get away with anything (even sending the manuscript back to me a second time for a few last corrections and improvements). The reviewers - Michael Ryan and Peter Dodson - also did their jobs (in my opinion). And, as mentioned in my last post, comments by John Scannella and Jack Horner offered additional constructive feedback.
One thing I really like about PLoS ONE is that my competing interest - as an editor at the journal - is stated up-front in the paper. Although it's somewhat scary seeing it there, I think such notices are certainly appropriate.
Final Thoughts
It's nice to finally have this paper out there - these ideas have been floating around in my head for awhile, and I've always had a secret desire to be the person to describe Nedoceratops. I'm relatively pleased with the final product (of course, there are always one or two typos that slip through, and why couldn't some of the figures in the PDF have been bigger?), and look forward to the discussion that this paper generates. Thank you to all who helped out (see the acknowledgments for a comprehensive list)!
Posted by Andy at 3:30 PM

Labels: dinosaurs, ethics, Nedoceratops, PLoS ONE, posts for the sake of posting, publishing

Thanks--this has been an interesting series of posts.

Figure 4 could have used an interpretative drawing, I think. :-o

Even though I'm not a ceratopsian geek I figured out quickly from the original photo and the description what the narial strut was...still labels are a crucial addition to any photograph. It drives me crazy when they aren't prent even in taxa I'm familiar with. Awhile back I had a post on my blog where I went to town on a paper that lacked labeled photos. No idea how that passed review.