Life After Death at Yellowstone

Taphonomy - the study of what happens to an organism after it dies - is integral to reconstructing the past. Perhaps the most important lessons come in inferring ecological interactions. Did that group of animals live and die together, or were they jumbled long after death? Were all of those shark teeth with the plesiosaur bones from a feeding frenzy, or just a fluke of currents? How closely does a set of fossils represent the relative abundance of the different species during their lifetime? Such examples are numerous, and thus we commonly think of taphonomy as a study in deep time. This is certainly true, but also certainly incomplete. In fact, some of the most ground-breaking taphonomic work has been done in contemporary ecosystems. Kay Behrensmeyer, for instance, has spent decades studying bone accumulations in Kenya, and a 1927 work by Johannes Weigelt (complete with photos of dead cattle) is still considered a classic. 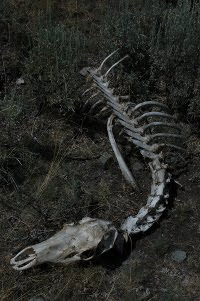 A new study by paleontologist and taphonomist Josh Miller, just published in PLoS ONE, shows some of the great insights that can arise from looking at taphonomy in modern settings. Josh and his field assistants trekked through Yellowstone National Park (one of the western USA's oldest and best-known parks), cataloging the identity and physical condition of every animal bone sitting out on the surface (an elk skeleton from the project is shown at right; photo courtesy of and copyright Josh Miller). Using these data, Josh found that you can actually infer the major ups and downs of animal populations from their old bones. This is quite exciting, not just from a gee-whiz factor, but because it may be possible to infer population trends for areas where historical surveys are absent or spotty. Such data are important not only for ecologists, but for informed public policy. It sounds magical, so how was the study done?
Based on other studies (in combination with radiometric dating), it's known that bones in excellent condition usually came from animals that died only recently, whereas bones in crummy condition are from animals that died longer ago. By using the condition of the bones as a proxy for time since death, Josh estimated how long the various bones of various animals had been around. Then, based on the bone ages, he estimated the relative population of each type of animal a given number of years ago. We have very good wildlife census data for Yellowstone, and it turns out that estimates from the bones match the "real" values quite nicely. Boom years for animals (such as elk) mean lots of bones going into the system, bust years mean few bones, and these trends shows up in bone surveys.
You can read all about it at PLoS ONE, or here, here, and here. I recently talked to Josh to get a few behind-the-scenes tidbits. Stay tuned for the interview later today! [update: now posted here]
Citation
Miller, J. (2011). Ghosts of Yellowstone: Multi-Decadal Histories of Wildlife Populations Captured by Bones on a Modern Landscape PLoS ONE, 6 (3) DOI: 10.1371/journal.pone.0018057
Note: I'm an academic editor at PLoS ONE, but had no role in the handling of this paper.
Posted by Andy at 9:56 PM

Every animal bone?? It would be impossible for a large army, let alone a few people, to find anywhere near every animal bone that is on the surface in Yellowstone Park, even if the search was limited to large animal bones.

I am amazed that anyone would believe that every animal bone was, or could be found. I've spent a lot of time in Yellowstone and have found some bones, but I would never say that I found all of them, or that I could. It's simply impossible. And besides, there are a lot of species of 'animals' with bones that were not part of the so-called study.

The claims of the so-called study are grossly exaggerated and so are your claims. This is really bad science. In fact, it isn't science at all, it's just BS.

It reminds me of polls of a few hundred selected people and then the results are applied to everyone in the country.

It seems unlikely that the results of this survey could be applied to palaeontology. Too many taphonomic unknowns in the process of going from bone lying on the surface to bone exposed at the surface X million years later.