Book Review: Am I Making Myself Clear? A Scientist's Guide to Talking to the Public

It's no secret that paleontology fascinates the public. New prehistoric-themed television air practically weekly, and even comparatively minor discoveries make the science section of the local newspaper. But, it's also fair to say that we paleontologists have a love-hate relationship with the news media. On the one hand, the exposure educates the public and shows the importance of an "esoteric" field like paleontology to skeptical funding committees. Yet, nearly everyone has some horror story about how they were taken for a ride by the press. Stories are misreported or overhyped, and television programs are sometimes painfully inaccurate. How is one to navigate this potential minefield? 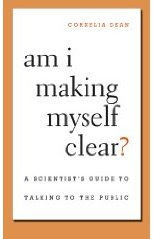 Enter Am I Making Myself Clear? A Scientist's Guide to Talking to the Public, a trim, timely book by science writer and former NY Times editor Cornelia Dean. The title indicates great ambitions, and Dean generally delivers on these, speaking with the authority and candor of someone in the trenches.

Fifteen chapters cover practically the entire spectrum of scientific communication, from print and electronic media to public policy and the legal witness stand. Dean's writing is concise and readable, with an appropriate number of relevant anecdotes sprinkled throughout. Her perspective as a journalist adds quite a bit to the narrative, particularly in the sections on working with reporters. Although I like to think that I know at least a little about the media, I found numerous tidbits to incorporate into my own efforts. Don't be disappointed if an hour-long interview doesn't produce any attributed quotes in a news article; your information is still crucial for reporters who may not know the field. Thank reporters who do a particularly good job. Use press releases judiciously. It's ok - in fact, even a good thing - to cite opposing points of view during an interview. Sound bites are your friend, if you prepare them carefully.

The short format of the book (indeed, it's just slightly larger than pocket-sized) means that many topics are covered in only the briefest fashion. For instance, the scant 17 pages devoted to book writing and publication is surely only the beginning for someone who is truly serious about such an effort. I personally would have liked to see a little more on preparing a public lecture. Thankfully, a carefully chosen bibliography offers some excellent suggestions for deeper reading.

One message echoes throughout the entire book: We scientists can't just sit back and let the journalists do the talking for us. As citizens, we have a responsibility - an obligation, even - to get involved. Sure, there might be bumps on the road, but in the shifting social, political, and economic sands of the early 21st century, communication is more important than ever before. If you are at all serious about communicating science to the public, you must read this book.

I completely agree with the premise of this book. The news media screws up paleontology in particular, so it's important that the scientists involved speak clearly and accurately to the public themselves.

IMHO, the media doesn't believe people will get it if it doesn't reference Jurassic Park. I think that's insulting. It's one of the reasons I started my blog in the first place...

Not to mention that the dumbing-down of paleontology results in an immature stigma about the paleontological field. Most of the media relating to dinosaurs has wacky narration or goes for the "look how awesome this dino is" aspect (besides "Walking with Prehistoric Life" trilogy). Paleontology is associated with childish imagery, a barrier I recently had to deal with in talking with my family about a career in paleontology.