When many of us think of viewing things under a "black light," we either think of those psychedelic posters from the 1960s or else the displays of fluorescent minerals that nearly every science museum has. It's also virtually mandatory to have a scene involving the use of "black light" in the popular CSI television programs - many bodily fluids show up nice and pretty under these conditions. "Black light," more properly known as "ultraviolet (UV) spectrum light", is just outside the visible light spectrum for us humans (past violet, hence the name). And, through some neat tricks of physics, many objects will brightly fluoresce under intense UV light when they wouldn't look like anything special under your standard sunlight or incandescent light bulb.

Oddly enough, many fossils fluoresce under UV light (certain minerals in fossils, including phosphates, are behind this phenomenon). Thus, this technique has been used to look for otherwise hidden features of some exceptionally well-preserved fossils. Historically, it's been the domain of invertebrate paleontologists (looking at crustaceans from the Jurassic of Germany, for instance), but vertebrate paleontologists have used the technique to identify forged fossils (like Archaeoraptor), study Archaeopteryx, and much more. What might be a very subtle or invisible structure under regular light (such as a feather shaft, or antenna, or soft tissue outlines) sometimes shines nicely under UV light.

Thus, Beijing paleontologist Dave Hone and colleagues applied the UV light technique to some of the spectacular fossils coming out of the Cretaceous-aged beds of China. In particular, they were interested in a little critter called Microraptor. A dromaeosaur (part of the same group including Velociraptor), Microraptor is relatively well-known as the "four-winged dinosaur." Spectacular fossils with feather impressions show the standard pair of bird-like wings on the arms and a second set of wings on the hind limbs. This suggests to some researchers that birds went through a four-winged flight phase early in their evolution, and the two-winged flight with which we are familiar only happened later. 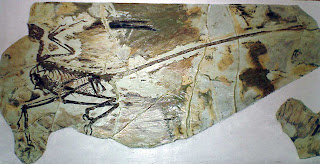 Cast of the type specimen of Microraptor gui, from the Wikimedia Commons, reproduced under a Creative Commons Attribution-Share Alike 2.5 Generic license.
Although the fossil looks spectacular, many paleontologists speculated that appearances might be deceiving. Were the feathers on the legs actually in place, near their life position? Or had they gotten moved around from somewhere else on the body? A pale halo of sediment (probably from the decomposition process) obscured the contact of the feathers with the bones, so the issue remained unresolved. Either way, it had major implications for avian evolution. 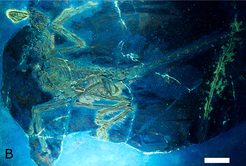 Hone and colleagues wondered if the full anatomy was obscured under visible light. So, they turned a UV light source against the specimen. It turns out that the feather structures fluoresce quite nicely - and can be traced right through the "halo" and up to the very edge of the leg bones. So, the feathers really are in place. Problem solved! [image, showing full skeleton, modified from Figure 2 in Hone et al. 2010]

Now that we're more confident that Microraptor really was four-winged (and not just an accident of fossilization), the conversation can move forward. And, this is a great rallying cry for other researchers - who knows what structures we might discover with UV light! 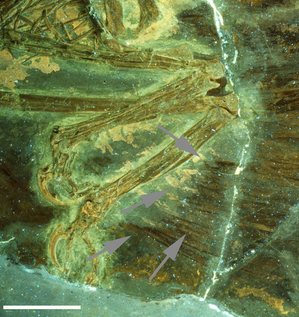 Close-up of hind legs of Microraptor under UV light, with arrows indicating feathers. The yellow stripes leading up to the leg bones are portions of the feathers visible only under UV. Modified from Figure 3 in Hone et al. 2010
Read the full paper in the freely-available, open access journal PLoS ONE (full disclosure: I was the editor who handled this manuscript). You can post comments or ratings for the article there, too! In the blogosphere, check out Dave Hone's posting on his article and this follow-up, Adam Yates' write-up, as well as ReBecca Hunt's interview with Dave.

FYI, the link in the citation at the bottom of your post doesn't work (but other links to the paper earlier in the post do).

That image of the holotype is actually a cast - not the original. You can tell as the anteiror skull was prepped out and is normally stored in a slow on the specimen. You can see it clearly in the UV image, but not on the cast. The cast is beautiful though and even in the flesh several people have mistaken it for the holotype it's so good.

Second, I'm not sure UV was used to look at Archaeoraptor. I think that was all done with X-rays (well, and basic observation). UV's not always so good for picking up those kinds of fakes since they are all made of real fossil parts, it might not be able to tell them apart.

Oh, and many thanks for the write-up too!

Noted on the cast - I was wondering that. I did a quick double-check, and UV was used as a (minor) component of detailing Archaeoraptor. But you are right that it's less useful for composites - but can be quite good for showing glue, etc.

It was used on Archaeorapor eh? Ah, news to me, thanks for that.

Based on my observations, the problme with using UV to spot these kinds of chimeric fakes are two fold. You might either see no differences at all (not all things fluoresce in interesting ways). In that case you can't say much useful.

Secondly, there can be quite a lot of variation in the way in which various tissues and matrix do fluorece. So even if one half of the specimen looks different to the other half, and even if this fits with a crack say, you may not be able to say that this is because the two halves are different.

Of course, this does not make it useless. Some definitive features may show up and again, differences in contrast etc. or very different structures or glue where there should be none would all be indicators.

Of course, the fakes are generally pretty easy to spot anyway because of the way they are assembled. So the general lack of information that UV light muight bring to this question is not much of an issues. Either the anatomy is wrong (a femur where the humerus should be) or inconsistent (three fingers on one hand and four on the other) or the grains of the matrix don't line up where the different blocks are mismatched.

It was only a minor component (first-hand observations were most critical), and mentioned only briefly in supplementary info. So perhaps not the best example. . .but you all know what I mean.