Something Fishy in PLoS ONE (and it's pretty neat!)

The open access journal PLoS ONE has published a lot of neat paleontology articles over the last few years (see here for a reasonably comprehensive listing). Charismatic, terrestrial vertebrates (whether dinosaurs, Ice Age mammals, or prehistoric humans) seem to dominate. But what about the poor, neglected fish? 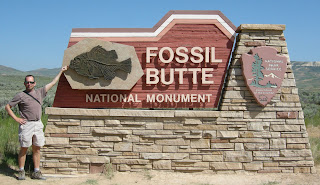 Today, PLoS ONE published a nifty article by Anthony (Tony) Martin [pictured at left] and colleagues, discussing a 50 million year old fish feeding and swimming trace fossil from Wyoming. In the build-up to the release of their paper, Tony (a paleontologist with a specialization in trace fossils, over at Emory University) was kind enough to answer a few questions about the paper. Part 1 (focusing on the science behind the paper) is posted today, and Part 2 (focusing on the open access angle) will arrive tomorrow. [Full disclosure: I was the academic editor at PLoS ONE who handled this submission]


Briefly, what is the importance of the finding described in your new paper?


Several parts of it are important, and they’re all related.

One is that this is the first fish trace fossil described in detail from a formation that’s world-famous for its fish body fossils, the Green River Formation near Kemmerer, Wyoming. The Green River Formation was made by a series of lakes about 50 million years ago, and it preserved many gorgeous fossil fish, which have been collected and studied since the 1850s. However, fish trace fossils, such as trails made by their fins while swimming along the lake bottom, have been mostly neglected. Trace fossils can be extremely valuable for directly reflecting ancient behavior, and because the trace fossil we studied was extraordinarily detailed, it gave us some new insights we might not have gleaned from the fish body fossils.

Secondly, we are very sure about the species of fish made the trace fossil, namely, Notogoneus osculus [figured at right]. This fish had always been interpreted as a bottom feeder, and this is the first trace fossil to confirm this behavior. Our identification of the tracemaker is unusual, because oftentimes it’s tough to tell just what animal made a particular trace fossil. This one, though, gave us some great clues about “who done it.” The trace fossil [see figure below] has beautiful sine-like waves and other marks that show it made by a fish with a downward-pointing mouth, two pelvic pins, an anal fin, and a caudal fin. What really cinched it, though, was that this same species is also found as a body fossil in the same layer as the trace fossil. So our conclusion about the tracemaker is a pretty tight fit in every respect.

Thirdly, we figured out the size of the fish by applying some mathematical and spatial-analysis techniques that had never been used previously on a fish trace fossil. From these methods, we were calculated that the fish was 45 cm, or about 18 inches, which is exactly the average size of Notogoneus osculus. So not only do we know which fish did it, we know how big it was! This makes for a great fish story, because we can say that it was “the one that got away,” we can tell people what it was, and hold out our hands to say, “and it was THIS big (45 cm).” The kicker, of course, is that we’re talking about a fish from 50 million years ago, and in a lake that dried up nearly that long ago.

Lastly, this trace fossil shows a fish behaving normally, swimming and feeding along the lake bottom. Yet it was made in the deepest part of Fossil Lake, which supposedly excluded live fish because of low-oxygen conditions. So this fish trace fossil, along with a few others we mention in the paper, should give future researchers a good reason to reconsider the paleoecology of Fossil Lake. We now know that fish feeding on the bottom of the deepest part of Fossil Lake was a part of its benthic ecology, giving us a new insight about this long-studied deposit.

If you could share one thing about the research that didn't make it into the paper, what would that be? Is there an interesting back story to the project?

Actually, two things should be mentioned, the back story and a philosophical perspective.

The back story is that this may be the only paleontological paper in which the coauthors consist of an ichnologist (me), a disease ecologist (Gonzalo Vazquez-Prokopec), and a geographer (Michael Page). I know it sounds like the start of a bad (and really nerdy) joke, as in, “An ichnologist, a disease ecologist, and a geographer walked into a bar one day…”, but it was a great opportunity for the three of us, all in the same Environmental Studies department at Emory University, to work together in a creative and synergistic way. I did the primary detective work, interpreting the trace fossil in the broadest sense, Gonzalo did some spatial analysis and Fourier transform calculations, and Michael put together the Deep Zoom™ application that allows a viewer to look at a detailed digital image of the trace fossil. This shows how science can work in imaginative ways!

The philosophical point I want to make is summarized by a sentence buried in the paper that refers to places where the fish’s fins lifted off the bottom of the lake and left no marks:

“In other words, these breaks in the continuity of the fin trails also constitute parts of the trace fossil, and have behavioral significance.”

A metaphor I will use to describe this is that the moments of silence in a piece of music are also part of the music. Likewise in this trace fossil, wherever the fish did not touch the bottom, these “empty” places are still part of the trace fossil, and filled with meaning.

Stay tuned for Part 2, to be posted tomorrow!

Image credits: Notogoneus image from Wikimedia Commons; picture of Tony by Ruth Schowalter; image of the ichnofossil modified from the original paper at PLoS ONE.