Back to the Late Jurassic, With Chris Noto

If you ask the average person to imagine the Age of Dinosaurs, odds are quite good that they might envision a scene from the Morrison Formation. This Late Jurassic-aged (156 - 147 million year old) rock unit of the western United States has given us such dinosaur greats as Stegosaurus, Apatosaurus, Allosaurus, and more. Many of these animals are known from exquisitely-preserved, complete skeletons - and thus their anatomy has been described in pretty ridiculous detail. The functional morphology (how these animals moved, breathed, ate, and fought) has also gotten a lot of attention. But, this only tells us about the individual lives of the organisms. To really understand their world, we need to think bigger. 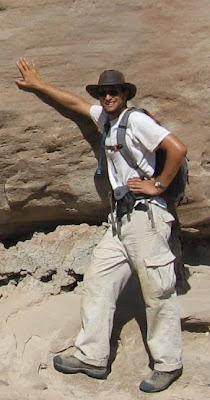 Chris Noto, my friend and academic brother (we had the same Ph.D. advisor), has devoted his scientific career to a big-picture understanding of dinosaur ecology. He has a special place in his heart for the dinosaurs of the Morrison Formation, and has been chipping away at their ecology for quite awhile now. Thus, it was really exciting to see his recent co-authored paper in PLoS ONE, about that very topic. Also of note was that this paper served as Chris's contribution to the 2009 Paleo Project Challenge!

Chris was kind enough to offer a little behind-the-scenes look at his project and the research results. I hope you'll find it enlightening!

How did you get the idea for your project?
Well, this involves going back a ways. I have always been fascinated by extinct organisms, particularly what they were like as living, breathing individuals in their environment. As an undergraduate at the University of Chicago I had the privilege of working with two really great scientists: Paul Sereno and Fred Ziegler. Paul is a well known paleontologist who has worked all over the world. Fred’s work was responsible for many of the paleogeographic and paleoclimate maps used today. Working with Paul got me thinking about how dinosaurs varied over space and time; working with Fred introduced me to global climate patterns and changes in continental arrangement.

Once I got to graduate school at Stony Brook University I was taught the fundamentals of ecological theory. I started formulating an idea for looking at variation in dinosaur communities (the collection of all the different types of organisms that live in an area) and how those differences may be related to climate, but wasn’t sure how to approach it. Enter my good friend (and coauthor) Ari Grossman, who suggested applying this method, called Ecological Structure Analysis, commonly used in the study of fossil mammals. After some discussion on the appropriate way to adapt this method to the type of information available for dinosaur fossils, we agreed to work together on this project.

What was the most challenging part of writing the manuscript?
Like many papers, this one languished half done for many years. This was a side project of ours, and unfortunately our dissertation research had to come first. Every time I started working on it again I would realize that the data needed to be changed or updated, and this would sometimes change the results and our interpretation. I am a stickler for details and want to make sure all the data are as accurate as possible. But this project was simply too cool to let go. Once I graduated I decided to finish this manuscript as a first priority. It actually didn’t take too long after that once I put my mind to it; in the end I think that the paper was all the better for it. I learned a lot in the meantime, which contributed to making it a stronger manuscript. The hardest part by far though was actually submitting it to PLoS ONE for consideration. No one likes to be rejected, especially after putting so much work into a project! But this is the way the peer-review system works.

I noticed that you used the program PAST for your statistical analyses - how did you decide on that program? Were there any particular challenges to using this software?
I was attracted to PAST because it could perform the analyses I needed to do without a lot of unnecessary complication. Best of all, it was free, and I was a poor graduate student at the time. Most commercial statistics programs are expensive and difficult to use. PAST has a relatively simple interface and the results are easy to interpret, which is important. The major challenge with using PAST is in data management. If the data are not arranged in exactly the right way the analysis will not work correctly. Therefore it requires arranging the data first in a program like Microsoft Excel, and then copying and pasting it into PAST.

What was the most interesting thing you learned while doing your research?
First of all, I wasn’t sure what to expect when I started doing this research. No one has looked for large-scale patterns like this in dinosaurs before. One interesting thing I learned is that such patterns exist in the fossil record and are preserved over the immense spans of time between when these communities existed and when they were recovered. The most exciting result for me has to be the fact that the proportion of different “ecomorphs”, such as high-browsing herbivores vs. low-browsing herbivores or bipeds vs. quadrupeds, varies with climate. So, we can draw a connection between the climate, environment, and adaptations of organisms living in an area (see figure below). This is no surprise for any ecologist working today, but has not been shown in a terrestrial ecosystem as ancient as the Jurassic (~155 million years ago). This opens up new areas of research into the role climate change plays on the structure of ecosystems over time.

Cartoon showing variation of environment and dinosaur ecomorphs. Drier conditions are on the left, where very large herbivores dominated among relatively sparse plant life. Communities under seasonal conditions are towards the center, and include a greater diversity of feeding modes among increased ground cover. To the right are moister conditions, where smaller herbivores are more prevalent within a more densely vegetated environment. Green=high browser, orange=intermediate browser, blue=low browser, red=ground forager. After Noto and Grossman 2010.

Thanks, Chris! For more about his research, check out his web site.

[Disclaimer: Although I am an editor at PLoS ONE, I had no role in the handling of this paper]

But ... Microsoft Excel? Have you forgotten what web-site you're writing for? Surely you mean OpenOffice Calc? :-)

thanks for your information....i hope it is can really very useful, hopefully useful for all

I really enjoyed Chris' paper. It's nice to see this kind of quantitative palaeoecology being done, particularly with respect to dinosaurs. I hope to see more work like this in PLOS One!