Allometric scaling - roughly defined, when different parts of an organism grow at different rates - is an important factor in biology. In part, allometry describes how babies have relatively larger heads than adults (we exhibit negative allometry in this trait, because our skulls don't grow as quickly as the rest of the body) or how some crabs have gigantic claws (an example of positive allometry, in which the claw grows much faster than the rest of the body). Allometry (and its counterpart isometry, in which proportions don't change at all) can be examined on an intraspecific level, such as the example in humans, or on an interspecific level. 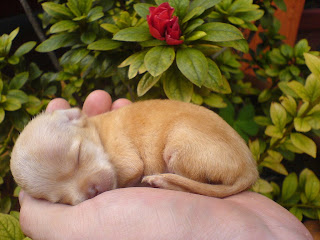 It's not cute - it's allometric!
Toronja Azul, Chihuahua Puppy, 5 August 2007 via Wikimedia Commons, Creative Commons Attribution 2.0
For paleontologists and biologists, allometry and isometry are particularly interesting when it comes to understanding groups with large ranges in body size. When you grow a Tyrannosaurus from an Eoraptor-like ancestor, what has to change in order to support the body mass? Sometimes it's postural - big animals tend to have more "columnar" posture (with the supporting legs straight beneath the body) and small animals tend to have more "flexed" posture. In other cases, it's allometric - big animals might tend to have relatively thicker bones than small animals. Sometimes, it might even be both. And sometimes, none of these comfortable patterns seem to fit perfectly.

Looking at Cats
Regardless of the patterns (and often because of them), scaling studies of limb bones have attracted a lot of ink over the years. A recent contribution, authored by Michael Doube and colleagues, appeared the other week in the open access journal PLoS ONE. Their paper, entitled "Three-dimensional geometric analysis of felid limb bone allometry," takes a novel peek at how different limb bones scale within cats. Cats are a particularly interesting study subject, because they span a range of adult body masses - from as little as 3 kg in the domesticated cat to 306 kg in the largest tiger.

Domesticated cat (left) and lion skeletons, scaled to roughly the same height at the shoulders.
Limb bone allometry in its own right is an interesting, but rather conventional, topic. Most studies are content to take some linear measurements, or perhaps a cross-section or two, for a range of species. Doube and colleagues did something unique - they examined the three-dimensional properties of entire limb bones, as well as two-dimensional properties in series along the entire bone, using CT scans coupled with custom-written software macros.

The macros (which are one of the really cool things about this paper, and a big reason for why I'm highlighting it here) calculate a variety of cross-sectional properties automatically from CT scan data. Previous macros (such as the very useful MomentMacroJ) required a human operator to do things one slice at a time. Believe me, this can take forever for a limb bone data set of 200 CT slices. The authors of the paper in question were able to quickly and efficiently assemble data sets for a variety of measurements from a variety of limb bones for a variety of felid species - over 16,000 CT slices in total! So, this allowed compilation of a database for measurements throughout the bone - not just at the boring old mid-shaft. Furthermore, they calculated joint geometries (through a sphere-fitting routine, to approximate surface area of certain joints) as well as moments of inertia for entire bones.

This data set allowed the authors to get one of the the most complete pictures of limb bone properties ever assembled. In general, cross-sectional properties at mid-shaft (a standard location for measurement) did not differ significantly from isometry (i.e., big cat bones look the same as little cat bones). Of course, a larger sample might achieve statistical significance at P less than 0.05 (results are suggestive, but don't differ significantly from isometry). Interestingly, joint surfaces and moments of inertia tend to scale with positive allometry. In other words, big cats have relatively bigger joints and beefier bones (a more thorough and accurate explanation of moments of inertia is beyond the scope of this post) than do small cats.

So why are these results interesting? Well, it appears that cats "get big" differently from other animals. Whereas comparably sized mammals tend to change from flexed limb postures to more columnar limb postures as body size increases, cats apparently maintain a relatively flexed posture across their size range. Instead, cats compensate for the change in body mass by beefing up their bones. Skeletal and postural responses to increased body size are pretty darned diverse, and there is no "one size-fits-all" solution. It will be very interesting to see broader applications of this methodology.

Open Source Solutions
The authors used ImageJ, an open source image processing system (detailed in a previous post here) for much of their data collection. The macro they wrote and used is also freely available with their paper--so feel free to try it out with your own data. Their massive datafiles were collated with MySQL, and the statistical analysis was conducted within R, using the SMATR package for regression analysis. So, it was an open source project from start to finish! As the cherry on top of the cake, publication in PLoS ONE means that the paper is easily and freely accessible to all. I've already made a few notes on the paper, with quick and gracious responses from one of the authors. If you have anything to add to the discussion, don't be shy!

Further Reading
If you're interested in more open source solutions to these sorts of problems, check out lead author Michael Doube's web page. He's got lots of macros, pretty pictures, and other goodies for enjoyment and download.

Thanks Andy, it was a fun paper for us to do. We're adding some new tricks to the method too, to calculate other things like angles, and applying analogous methods to trabecular bone.

FYI the original Fig 3 in the paper pdf got wonky formatting but the current pdf has this fixed.