Fossil footprints (falling in the general category of "ichnofossils") reveal a wealth of information about dinosaur biology, such as speed, posture, and behavior. These traces are particularly useful when offering information independent from, but consistent with, hypotheses derived from purely anatomical studies.

Today, a new paper in the open access journal PLoS ONE presents an unusual set of theropod (meat-eating dinosaur) ichnofossils from the Early Jurassic-aged Moenave Formation of southwestern Utah. The tracks are preserved within the St. George Dinosaur Discovery Site at Johnson Farm, a massive facility housing thousands of footprints (for additional scientific publications and background on the site, refer to this page). But, if there are thousands of footprints known at the site (in addition to the thousands known from other sites throughout the world), what makes the fossils featured in the paper so special?

Theropods were bipedal animals, and known ichnofossils typically only preserve evidence of the hindlimb. But, one specimen in particular at the St. George locality preserves impressions of the hind feet, forefeet, and the rear end of a lazy carnivore. A resting trace! 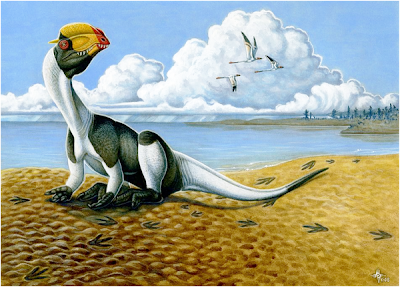 Artist's conception of the St. George trackmaker at rest. Note in particular the resting posture and the orientation of the hands. From Milner et al. 2009; painting by Heather Kyoht Luterman.
Yet, even resting traces aren't completely unheard of for theropod dinosaurs. The really interesting thing here is that the specimen preserves relatively unambiguous impressions of the hand posture. The animal was resting with its hands turned inward, and the outer surfaces of the fingers and wrist (rather than the palms) touching the substrate.

Why does this matter? Well, it all has to do with reconstructions of forelimb mobility and posture. Old reconstructions of theropod dinosaurs showed them walking around with palms down (think of an alligator dragged upright); later work has strongly suggested that the palms faced inward, more like birds. 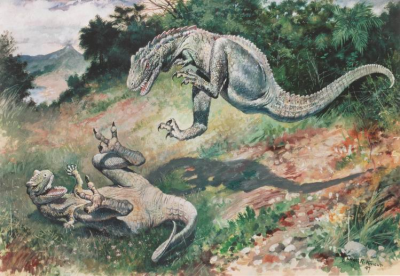 Traditional restoration of two theropods, by Charles R. Knight. Note the palm-down, rather than palm-in, posture of the hands.

As the authors note, anatomical reconstructions of forearm movement have primarily focused on more "derived" theropods (animals from the Late Jurassic and beyond). It would be really, really nice to get additional studies on the anatomical structures of the forelimb in animals like Dilophosaurus and Coelophysis (Ken Carpenter did get a good start on this a few years back; see his 2002 paper, "Forelimb biomechanics of nonavian theropod dinosaurs in predation." Senckenbergiana Lethaea 82: 59-76). Also, paleontologists will want to be on the lookout for similar traces. Is the specimen described here typical, or an individual anomaly? The authors reviewed other alleged resting traces from theropods, but considered that most of them were either misidentified or too poorly preserved to offer usable information. Finally, does resting posture of the forelimbs necessarily reflect what the animals were doing the other 99 percent of the time?

Congratulations to the authors on a stimulating paper. If you have an opinion on this research, don't just post it in the blog's comment section (although please do that, too). Head over the the PLoS ONE website, and register your own comments, notes, and ratings on the article!

Many thanks for blogging about this -- we love the coverage! The only thing I'll add at the moment is that if anyone else loves Ky Luterman's reconstruction that you figured, please visit her web site here.

You're welcome, Jerry! She does some great work - I especially love her lemur images. A link to her website is now in the image caption.

Thanks for inserting that link -- she was kind enough to do the reconstruction for us gratis for the publicity -- now I hope she gets actual commissions and prestige in the paleoart world!

It would be really, really nice to get additional studies on the anatomical structures of the forelimb in animals like Dilophosaurus and Coelophysis

In the course of doing this research, we contemplated this. As you noted, Ken's done some really good work on Coelophysis, though finding relatively uncrushed stuff of that animal to work with is difficult. Strangely, no wrist bones appear to have been preserved with the published Dilophosaurus specimen, so detailed work with its function are out for the moment...believe me, we thought of jumping right on it!

Thanks a bunch for the blog Andy! Nice to see this paper finally out. Seemed like it took forever.

What IS ichnology anyway?

The study of fossil footprints and trackways, I think.

Actually, ichnology is the study of traces. For paleontology, it ought to be called "paleoichnology," the same way that "ecology" is different from "paleoecology," to mean "fossils of traces" (or, as they're more commonly called, trace fossils). But for some reason, "ichnology" has come to encompass both the extant and extinct stuff.

Anyway, a trace fossil is any remains of ancient life that were made by an organism's body, but is not itself part of the body. For dinosaurophiles, this is most often, and most obviously, footprints, but it also includes coprolites, bite marks, and (for at least some people) eggs. Ichnology is more commonly studied for invertebrates, since they're much more common than vertebrates like dinosaurs -- these would be fossils of tracks made by invertebrates as well as burrows and, for plants, root casts. Note that natural molds and natural casts of bones are not considered trace fossils -- they, like the bones themselves (as well as shells, skin, feathers, leaves, etc.), are body fossils. Ichnological studies on invertebrate traces are important for determining various aspects of paleoenvironment -- certain kinds of ichnites are characteristic of very narrow, very specific kinds of environments (e.g., different distances offshore and under water of different depths). For vertebrates, like dinosaurs, it isn't useful in quite that way, but the ichnites are very important for determining aspects of extinct animal behavior that would not otherwise be easily determined from body fossils -- after all, the traces were made by living animals in the act of behaving...!

Galton, P.M. 1971. Manus movements of the coelurosaurian dinosaur Syntarsus and the opposability of the theropod hallux. Arnoldia 5(15):1-8. [note that the reference to the hallux in the title is a typo - should be pollex]

Certainly it's a terrific paper, and one of the few on manus functional morphology in basal theropods. It supports the ability of such theropods to hyperextend their manual digits, but I still don't think that they did this when resting on the ground -- what would be the point?

I'm sorry Andy, but your characterization of the manus configuration in early Knight restorations is incorrect. The "Laelaps" painting is equivical in this respect. All three of Knight's Allosaurus paintings at the AMNH have palms facing medially, not to mention his classic drawing of Ornitholestes leaping to capture an Archaeopteryx. The same situation occurs in the original Tyrannosaurus painting with the family of three Triceratops. Pronated theropod forelimbs are more characteristic of the "Dinosaur Renaissance" than of the early restorations.

It is such a mystery know what really happened to those animals in those days, many said about the meteor, others about volcanic activity, but they don't say is about the footprints of men along side with dinosaurs, and the evidence puts them on the same epoch of time, walking together.