Ancient Beavers in PLoS ONE: Interview with Josh Samuels

An earlier post here detailed a study just published in PLoS ONE, which focused on unraveling the relationship of an extinct Chinese beaver, Sinocastor, to its modern cousins in the genus Castor. Using a combination of morphometrics (shape analysis) and good old fashioned description, a team led by paleontologist Natalia Rybczinski concluded that Sinocastor is indeed quite distinct from today's Castor. 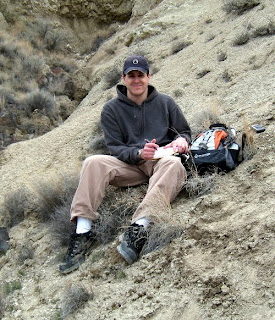 Yesterday I caught up with one of the co-authors of the study, Josh Samuels. Josh is an expert on fossil rodents (especially beavers) and morphometrics, working as a paleontologist at John Day Fossil Beds National Monument. He was kind enough to answer a few questions about his part in the project.

You have quite a track record of working with beavers and other rodents. How did you get interested in this group in the first place?
Ever since I was a kid, I have been interested in understanding how extinct species lived. In college I became interested in studying the evolution of mammals, particularly their dietary and locomotor specializations. I learned that rodents are the most species rich group of mammals and have amazingly diverse ecologies, with everything from semi-aquatic carnivores to gliding herbivores and blind burrowers. Despite their diversity, the evolution of rodents has not been as well studied as some other groups. Beavers, in particular, are known for their dramatic impact on ecosystems and have an excellent fossil record. Given their importance today, I find working to understand their evolution to be quite fascinating.

The PLoS ONE paper certainly was a collaborative effort - what role did you play in the research?
Some of my past research used geometric morphometrics to examine how skull shape in rodents relates to their ecology. Natalia approached me about the possibility of using similar techniques to examine how Sinocastor was related to living and extinct beavers. I helped design the methods and ran most of the analyses, and writing the paper was definitely a group effort. Having a group of collaborators with different skills really helped the project come together smoothly.

Was there anything particularly surprising to you about the results?
Given the broad geographic range of Eurasian and North American beavers today, I was surprised to find subtle, yet consistent differences in shape among species. One of the specimens in our analysis was from a peat bog in England, but its skull shape was almost identical to individuals from China and Russia. This really gives me hope that these techniques could be used an effective way to look at the phylogenetic relationships of extinct species.

Full disclosure: I am an editor at PLoS ONE
Image credits: National Park Service website