A Flood of Paleo Articles in PLoS ONE

It has been pretty incredible to see the rise of PLoS ONE as a major outlet for articles on paleontology, and it has been equally incredible to ride along as an editor for that journal. The past few months have seen many scientifically important and interesting papers wend their way into publication. I haven't had a lot of time for blogging lately, but wanted to take this opportunity to highlight the latest paleo-themed research in PLoS ONE. The following list is in reverse chronological order (newest to oldest), covering work published in the last three months.
********************
Slater GJ, Figueirido B, Louis L, Yang P, Van Valkenburgh B (2010) Biomechanical Consequences of Rapid Evolution in the Polar Bear Lineage. PLoS ONE 5(11): e13870. doi:10.1371/journal.pone.0013870
Summary: The authors present and interpret finite element modeling results for polar bears and brown bears, showing that the skulls of polar bears are generally weaker than those of their close cousins. Furthermore, these differences probably accumulated rather rapidly.

Xu X, Wang K, Zhao X, Sullivan C, Chen S (2010) A New Leptoceratopsid (Ornithischia: Ceratopsia) from the Upper Cretaceous of Shandong, China and Its Implications for Neoceratopsian Evolution. PLoS ONE 5(11): e13835. doi:10.1371/journal.pone.0013835
Summary: Zhuchengceratops inexpectus is introduced; this small horned dinosaur is actually among the largest of its kind, the "leptoceratopsids." Interestingly, it showed up in a big bonebed in eastern China, along with truly giant horned dinosaurs and duck-billed dinosaurs.

Longrich NR, Horner JR, Erickson GM, Currie PJ (2010) Cannibalism in Tyrannosaurus rex. PLoS ONE 5(10): e13419. doi:10.1371/journal.pone.0013419
Summary: Bones of Tyrannosaurus with T. rex tooth marks are described; the implications are pretty self-evident (see the title of the paper, if you're still trying to figure this out). This paper received considerable media attention; Brian Switek has one nice write-up at Dinosaur Tracking.

Cisneros JC, Gomes Cabral U, de Beer F, Damiani R, Costa Fortier D (2010) Spondarthritis in the Triassic. PLoS ONE 5(10): e13425. doi:10.1371/journal.pone.0013425
Summary: Suffering from what is described as the earliest known example of arthritis, an early archosaur had a pretty rough time with some fused vertebrae. Diagnoses of disease in fossil organisms can be pretty controversial; I shall be interested to see how this particular case study plays out.

Smith ND (2010) Phylogenetic Analysis of Pelecaniformes (Aves) Based on Osteological Data: Implications for Waterbird Phylogeny and Fossil Calibration Studies. PLoS ONE 5(10): e13354. doi:10.1371/journal.pone.0013354
Summary: Here, the relationships of pelecaniform birds (including pelicans, cormorants, boobies, and more) is addressed in great detail. The group is not found to be monophyletic, and the unstable nature of the position of several key taxa means that ornithologists will be talking about this question for some time.

Han J, Kubota S, Uchida H-o, Stanley GD Jr, Yao X, et al. (2010) Tiny Sea Anemone from the Lower Cambrian of China. PLoS ONE 5(10): e13276. doi:10.1371/journal.pone.0013276
Summary: What the title says. The authors suggest that their new animal, called Eolympia pediculata, is a stem member of the group including corals and sea anemones. The image at right shows the authors' reconstruction of Eolympia.

Peterson JE, Lenczewski ME, Scherer RP (2010) Influence of Microbial Biofilms on the Preservation of Primary Soft Tissue in Fossil and Extant Archosaurs. PLoS ONE 5(10): e13334. doi:10.1371/journal.pone.0013334
Summary: This article presents experimental support for the idea that microbial biofilms form a protective layer that allows preservation of deeper soft tissue structures in dinosaur bones and other fossils-to-be. Read more about the research here. Interestingly, the article by Peterson et al. disagrees with an earlier paper published in PLoS ONE (written by Kaye et al.), stating that any alleged soft tissue preserved in fossils is a microbial film alone. Thus, the bacterial biofilms exist - but they're not the only biogenic structure in these bones!

Oxnard C, Obendorf PJ, Kefford BJ (2010) Post-Cranial Skeletons of Hypothyroid Cretins Show a Similar Anatomical Mosaic as Homo floresiensis. PLoS ONE 5(9): e13018. doi:10.1371/journal.pone.0013018
Summary: Yet another round in the discussion about the "hobbits" of Flores, Indonesia. I get the sense that Oxnard et al. are very much in the minority opinion, but I also get the sense that this debate is going to drag on for awhile more. 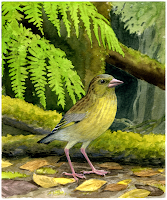 Rando JC, Alcover JA, Illera JC (2010) Disentangling Ancient Interactions: A New Extinct Passerine Provides Insights on Character Displacement among Extinct and Extant Island Finches. PLoS ONE 5(9): e12956. doi:10.1371/journal.pone.0012956
Summary: A recently extinct finch, Carduelis aurelioi, is named and compared with its fellow prehistoric finches (some of which are still alive today). Evidence is presented to suggest that the effects of ancient competition between the species still reverberate today. The image at left shows a life restoration of the new species, as imagined by A. Bonner.

O'Rourke CT, Hall MI, Pitlik T, Fernández-Juricic E (2010) Hawk Eyes I: Diurnal Raptors Differ in Visual Fields and Degree of Eye Movement. PLoS ONE 5(9): e12802. doi:10.1371/journal.pone.0012802
Summary: It's not strictly paleontology, but the methods here present actual experimental validation of the true visual fields for extant birds of prey. It would be interesting to compare the visual fields as calculated from the osteology alone with the experimental results - and then see what this means for similar calculations performed for extinct dinosaurs.

Sampson SD, Loewen MA, Farke AA, Roberts EM, Forster CA, et al. (2010) New Horned Dinosaurs from Utah Provide Evidence for Intracontinental Dinosaur Endemism. PLoS ONE 5(9): e12292. doi:10.1371/journal.pone.0012292
Summary: Utahceratops gettyi and Kosmoceratops richardsoni, two new horned dinosaurs, are named, and their implications for Late Cretaceous biogeography in North America are discussed. This paper, on which I was a co-author, received a substantial amount of media attention. See my blog post on the subject as a starting point for more information.

Kraatz BP, Meng J, Weksler M, Li C (2010) Evolutionary Patterns in the Dentition of Duplicidentata (Mammalia) and a Novel Trend in the Molarization of Premolars. PLoS ONE 5(9): e12838. doi:10.1371/journal.pone.0012838
Summary: Here, the authors propose new ways to interpret the anatomy and evolution of rabbit teeth, based on some previously undescribed fossils.

Noto CR, Grossman A (2010) Broad-Scale Patterns of Late Jurassic Dinosaur Paleoecology. PLoS ONE 5(9): e12553. doi:10.1371/journal.pone.0012553
Summary: The Jurassic was an age of giants. The structure of some old, old ecosystems is reconstructed by classifying and comparing the ecomorphotypes of a number of dinosaurs from this time.

Degrange FJ, Tambussi CP, Moreno K, Witmer LM, Wroe S (2010) Mechanical Analysis of Feeding Behavior in the Extinct “Terror Bird” Andalgalornis steulleti (Gruiformes: Phorusrhacidae). PLoS ONE 5(8): e11856. doi:10.1371/journal.pone.0011856
Summary: Terror birds are pretty much what the name says - imagine something the size of "Big Bird" from Sesame Street, preying on Mr. Snuffleupagus. This article, which also received broad media coverage (see the Witmer Lab blog as a starting point), finds that the skulls of these big birds were quite strong in the up-and-down direction, but not so strong from side-to-side.

Hi, been reading your blog for a month now since I found it and added you to my blog roll. Interesting posts and awesome blog. Best wishes from Project Dryptosaurus!

Wish I got in on your paleo challenge, I'm slacking on a lot of great things :-( Can't wait to read more! You are very talented!