Beavers are some of the most distinctive (and largest) rodents around today. Two species of the extant beaver, Castor, are found throughout the northern hemisphere, and these animals have an enormous effect on their landscapes. Beavers are perhaps most famous for their dam-building activities, altering the flow of streams and generating valuable wetlands used by other animals. Surely, the impact of this group extends far back in geological time. 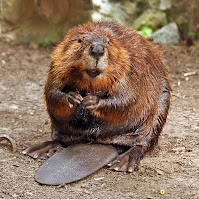 Many early beavers were fossorial, or burrowing, with little indication of aquatic tendencies. For instance, the 25 million year old Palaeocastor produced giant spiraled burrows known as "devil's corkscrews." Perhaps the acme of beaver evolution occurred during the Miocene (~23 to 5 million years ago). At least 12 genera lived worldwide; only one of these, Castor, survived to the present day. An obvious question for paleontologists thus concerns the when and where of modern beavers' origins.

Enter Sinocastor. This genus was named in 1934 by famed Chinese paleontologist C.C. Young, for several species recovered in China and Mongolia from rocks deposited during the last 5 or 6 million years. Almost immediately, other authors lumped Sinocastor into Castor, and there Sinocastor has stayed for the most part. Was this a valid opinion, or did such lumping obscure a more interesting paleontological pattern?

Fortunately, the exquisitely-preserved type (first described) specimen for Sinocastor anderssoni was recently restudied by a team of paleontologists from Canada and the United States. Led by Natalia Rybczynski of the Canadian Museum of Nature, the paper describing their findings appeared this week in the open access journal PLoS ONE.

The authors of the new paper used geometric morphometrics, a type of shape analysis, to see just how similar the skull of Sinocastor (at right) was to modern and recently extinct Castor. For additional comparison, the early European beaver Steneofiber castorinus was also thrown into the mix. Points on the various skulls were digitized from photographs and run through computer programs that calculated the similarity between the specimens.

In the end, the skull of Sinocastor fell well outside the anatomical range for modern and even most extinct beavers. Rather substantial shape differences distinguish Sinocastor from Castor; for instance, the snout is shorter and the braincase broader in Sinocastor. Although genera are always somewhat subjective, Rybczynski and colleagues argue that the major differences between Sinocastor and the species of Castor warrants the retention of Sinocastor as its own genus.

Based on several other lines of evidence (including tooth anatomy), it is suggested that Sinocastor may be the sister taxon (closest relative) to modern beavers. In concert with dated fossils, this means that the common ancestor of these two kinds of beaver may have originated in eastern Asia and then spread westward into Europe and eastward into North America. The arrival of modern beavers on that landscape must have had massive ecological consequences - only more investigation of the fossil record will tell!

Stayed tuned: Tomorrow, an interview with Josh Samuels, one of the paper's authors!

Full disclosure: I am an academic editor at PLoS ONE, the journal at which the paper described here was published.
Image credits: Image at top from Wikimedia Commons (by Steve); fossil skull modified from Figure 14 in Rybczynski et al., 2010.
Posted by Andy at 5:30 PM